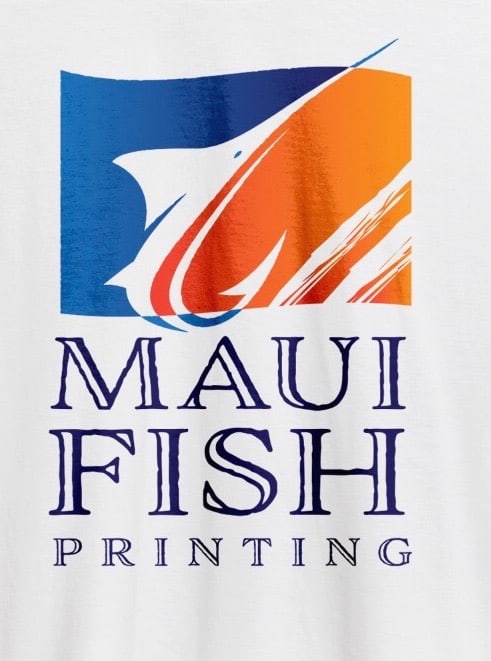 Gyotaku reflects a part of Japanese history. Gyotaku or fish printing, is an ancient, time honored traditional Japanese art form. Over a couple centuries ago, Japanese fisherman would paint their prized catches and cover them with a piece of rice paper and gently rub. Depending on the amount of paint put on the fish, the type of fish and the amount of pressure used while rubbing, it would create an exact detailed imprint of the fish. Once the print is complete, color can be added and detail is carefully added to the eye. It began as a way for Japanese fishermen to commemorate their catch and it still is the most unique, creative and artistic way to display any catch.

Over the years, Gyotaku has grown to be recognized as its own art form. The essence of fish printing is very simple and pure, and this is what drew me to begin my artistic journey. I believe it is my duty to capture each fish's soul, bringing it back to life by getting the most detail possible on each print. Here at Maui Fish Printing, you can expect to have expert work executed with your personal gyotaku fish print. Contact us today at 808-344-9954 or mauifishprinting@gmail.com to get started.

Breaking Down the Legacy

When you break down the word gyotaku, you have gyo meaning “fish” and tako meaning “rubbing” or “print.” It is an art that produces the imprint of a fish through the method of rubbing so it can be interpreted as a direct translation. This method in turn is very similar to Chinese stone rubbing which is an ancient method of reproducing imprints that were originally made from bone, stone, or metal. Yet gyotaku was not originally an art form at all and was a means to record fishermen’s daily catches. It was an accurate way to record the size and shape of a fish. This traditional technique would then evolve into a genre of scientific illustration used as an educational tool and then eventually into a modern method of art. When this was all developing in the mid 19th century, photography was still unavailable or perhaps not known to all at large so to compensate fishermen would be sure to supply the equipment used for Gyotaku. They would often keep a chest of rice paper, nontoxic sumi-e ink, and a set of bruises so they could easily access and make an ink etching of their catches. Once  the print was secured, the ink on the fish would be rinsed off, and then the fish either released, eaten, or taken to the market to be sold.

As these prints were very life-like and accurate they were often used to determine fishing contests in Japan. If done right, they were even able to attain the subtle patterns and textures of the fish. Soon color and environmental detail were added with a brush to enhance the black ink prints. Moreover, the knowledge of Gyotaku spread to western spheres in the mid 20th century. In the 1950s a Gyotaku exhibition was organized in Tokyo by an enthusiast group called the Gyotaku-no-kai. Yoshio Hiyama’s 1964 book Gyotaku: The Art and Technique of the Japanese Fish Print, further spread the tradition to an international audience. Now museums such as the Smithsonian have recognized the potential of the technique in conservation work.

The Technique Involved With Gyotaku

Gyotaku involves direct or indirect methods of printing. The direct method is referred to as Chokusetsu-ho which is similar to the original methodology that involves cleaning the fish and covering the body with ink. Wettened washi paper is then pressed onto the fish and is rubbed in.  With the indirect method of kansestsu-ho washi paper, silk, or other fabrics that are adhered to the fish with rice paste. The detail of the fish is shown in relief throughout the silk with the ink painstakingly applied to the silk while it’s adhered to the fish. Although the direct method is considered faster, the indirect is known to yield more precise results.   Finally, another lesser-used technique referred to as tensha-ho can be used when you are seeking to transfer the fish onto hard surfaces. It will involve preparing and inking the fish like the direct method and lifting the image by pressing a piece of nylon or polyethylene onto it and then carefully placing it on the hard surface chosen. Learn more about the processes by getting in touch with us for your own gyotaku fish print.

With over 18 years of experience, Maui Fish Printing is a well-established company that will bring your fish art to life. Our processes are proven to yield excellent detailed results that will be sure to wow anyone who lays eyes on the piece. You’ll be able to enjoy a centuries-old Japanese tradition in your home or business that will brighten the room for years to come. Get started with your customized art piece of gyotaku fish print, by giving us a call today at 808-344-9954. You may also email us at mauifishprinting@gmail.com.

Your cart is currently empty.

This is only visible to you because you are logged in and are authorized to manage this website. This message is not visible to other website visitors.

This means you can use the camera on your phone or tablet and superimpose any piece of art onto a wall inside of your home or business.

To use this feature, Just look for the "Live Preview AR" button when viewing any piece of art on this website!

Below, select which favorite lists you would like to save this product into.

This means you can use the camera on your phone or tablet and superimpose any piece of art onto a wall inside of your home or business.

To use this feature, Just look for the "Live Preview AR" button when viewing any piece of art on this website!

Enter your email below and we'll email you a 20% OFF Coupon right now.

This offer is valid for NEW CUSTOMERS only.